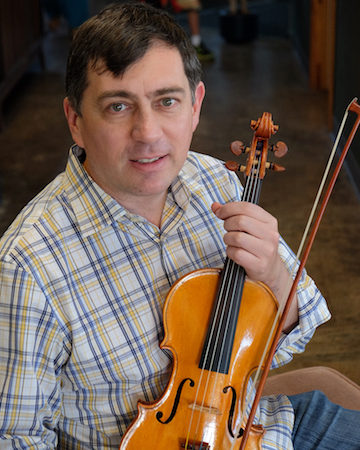 Roberto Cani, Violinist, studied at the Milan Conservatory of Music, the Gnessin Institute of Music in Moscow, and the University of Southern California. He made his debut at Gaveau Hall in Paris in 1987 and has concertized in his native Italy, Russia, Poland, Croatia, Germany, Austria, Belgium, Spain, Serbia, France, Taiwan, Japan, and South Africa. He has been guest concertmaster for the London Philharmonic and the La Scala Philharmonic and has performed as a soloist with the Moscow Philharmonic and the Orchestra of La Scala in Milan, among others.
Roberto was a prizewinner in the Paganini (Genoa, 1990), Jeunesses Musicales (Belgrade, 1991), and Courcillon (France, 1991) International Competitions. He also won honors in the Tchaikovsky International Competition (Moscow, 1994).
Roberto Cani plays on a 1735 Giuseppe Guarneri del Gesù ex Baron Knoop on generous loan from the ProCanale Foundation in Italy, is currently Concertmaster for the Los Angeles Opera, and is SMCM Faculty since 2015.